Hello, all you diplomats out there…as well as any autocrats, bureaucrats, and acrobats, too. We’d like to spotlight a few programs playing our music, so let’s get this show on the road. England’s DJ Shaz played two GBD songs during her Kuiama’s Choice program on The Sandbag Times Radio Show. We already discussed chess as a metaphor in “She Made A Move On My Heart” and pop songs in general, so please humor us as we perform a quick dissection of the other GBD song Shaz played.

It Was The Best Of Rhymes, It Was The Worst Of Rhymes
“Brittany,” a weird little number about an impossibly needy girlfriend, was derived from a mixed bag of influences. It’s our version of the musical dichotomy in which a song has a bouncy melody contrasted with rather dark, dire lyrics. Lines like “the skill of Pontius Pilate’s antiseptic hands” and “she knows that you are Abel, leans on you like a Cain” are blatant, fumbling attempts to conjure up Elvis Costello, who is the absolute master at turning an acerbic phrase, i.e. “the only stake you cannot raise is the one driven through your heart.” (By the way, we just picked up Elvis’s autobiography “Unfaithful Music & Disappearing Ink,” and it promises to be an interesting summer read.) During the extended bridge, in which “Britanny” modulates into a happy-go-lucky Lydian mode, we take a stab at emulating Cole Porter’s sophisticated internal rhymes):

“I stumbled on her quite by accident, or so it seemed
Humbled that I might help her repent, I felt redeemed”

That layering of multiple rhymes is just GBD desperately striving, with stars in our eyes, to briefly touch some of Porter’s lyrical magic. But it’s ultimately a fool’s errand, because he was unparalleled in his ability to effortlessly create deviously clever Tin Pan Alley internal rhymes.

Channeling either Costello or Porter…is easy with neither, and a very tall order. (Ha! See what we did there?) The point is, it’s exceedingly tricky trying to tap into elements of both great composers in one song! Our grand ambitions for this tune were probably unattainable from the start, but we hope you will find a bit of odd charm in the whole endeavor.

By the way, if you tune into Kuiama’s Choice, you might hear fellow Bandcamper Chloe Chadwick and her melodic Lynn Anderson-style 70s country song, “Feels Like Home.” 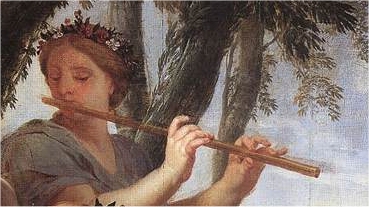 Etymological Musings
On the other side of the channel, Euterpia Radio, hosted by “a French guy from Switzerland,” started off Episode 84 with “Sweet Abiding Love.” We recently wondered about the origins of the name “Euterpia” and offered a plausible theory involving continents, Sir Thomas More, and a book that imagined a perfect society. As it happens, we were way, way, waaaay off. Actually, the host informed us that Euterpe was a Greek goddess, the musical muse of the flute, the lyre, and lyric poetry, who was known as The Giver of Delight. Well, that certainly makes more sense than our wild conjecture about Europe and Utopia. Speaking of Greek mythology, Morpheus, the Winged God of Dreams, would dig the song that immediately followed ours, and so will you. It’s Hegarty with their raspy country rock tune, “I Only Dream In Black Or White.”

Do You Come From A Land Down Under
On the other side of the world, Ralphy’s Music of the World also sent out our Motown love vibe by spinning “She Made A Move On My Heart” on Episode 126. Perhaps we are on the verge of a song-writing revolution by re-popularizing the exciting game of chess as a musical theme. Or, perhaps not. By the way, the great and wondrous Ralphy from the land of Oz is also set to play another GBD tune on Episode 127, so be sure to tune in. You might just hear an artist like Anne Sumner singing an intimate and lovely ballad reminiscent of Tracy Chapman or Janis Ian called, “Solid Ground.”

As you are by now painfully aware, all of The Gunboat Diplomats songs are available for streaming and downloading on Bandcamp at our super-special double-goose-eggs pricing model. So haughtily announce, “Money is no object!” and download to your heart’s content. Thanks to the programs and stations playing GBD and supporting indie music and to everyone for listening.